This is the first of a series of blog posts about my journey to Nepal. I spent 10 days in Nepal and for seven of those days, I lived in Oda, a tiny Himalayan village where people live on the brink of existence. This is an account of my experiences.

The journey to Oda lasted two days. After traveling by plane, car, and foot we finally arrived a tiny village nestled high up in the Himalayan mountain ranges of western Nepal. From my time spent here, it wouldn’t be an unfair characterization to say that Oda is the last place on earth – sort of a forgotten outpost that belongs to a world different from the one that the rest of humankind inhabits. To put into perspective how different Oda is, to the unsuspecting person in New York, London, or Singapore, Oda is inconceivable in their realm of imagination. The wheel that dictates the unfolding of life here spins at an altogether different pace. Everything is different: the eating habits, the food, the clothing, the social norms, the geographic relief, the biome, and even the rhythm of day and night are unlike you would imagine. To travel to Oda is to take a time machine to a period in human history that predates the advent of electricity (but for a few solar panels), cities, paved roads, indoor plumbing, the TV and certainly the Internet. I would add modern medicine to this list, if not for the work of the Oda Foundation, an NGO started by John Christopher, an alumnus of Washington and Lee who has lived and worked in Nepal for the past 5 years.

But before telling you more about John and the Oda Foundation, let me sound a precautionary bell. In this blog post, I want to recount experiences about my encounter with a people who live life on the very edge of existence. In my attempt to weave this narrative, I may be treading on shifting ground. As an African, I have been part of a people whose story is always told, often through tinted glasses, by others with little appreciation of the nuances of our way of life. Having spent barely a week in Oda, any portrait I paint of the village, or Nepal for that matter, is but a snapshot in a long and rich history deeply rooted in complex social, political and cultural paradigms of which I understand little. This is not to say I am a disinterested observer. I see through eyes that have been biased by my own upbringing, experiences –especially in Cameroon, also a developing country that faces similar challenges as Nepal– and education. It is only by bringing the entirety of my senses, faculties, and emotions to bear that I can truly describe what an experience visiting Oda is. With that precautionary note out of the way, here’s an account of my journey and experiences.

To arrange my thoughts and ideas into a coherent format, I will write this blog in episodes. Each episode will recount a different encounter or experience of my visit to Nepal, altogether weaving bigger narrative of the story, culture, country and people I’ve come to witness.

The idea of making a trip to Oda started with a phone call. I was on the phone talking to Kirk, a long-time friend and mentor when he first mentioned the idea of a trip to Oda. Kirk had visited The Oda Foundation before and thought the trip was a transformational experience. I too could benefit greatly from it, he had suggested. Haven grown up in a tiny village in Cameroon myself until age 11, Kirk wondered how that experience might compare to the way of life of the villagers in Oda. Not that it took much convincing to get me to sign up, but Kirk offered to pay for the trip. I wasn’t going to pass up a sponsored, exciting adventure to a new country I had never before visited. Weeks later plans crystallized and on January 14th Soo, my travel companion from South Korea, and I were airborne en route to Nepal.

After an overnight layover in Chengdu, a city in mid-west China, we boarded an Airbus A319 operated by Shenzen Airlines to Kathmandu. I had requested a window seat because I wanted to keep an eye out for the Himalayan mountain ranges. As a child in Cameroon, I had first heard about the Himalayas during a geography class. We were supposed to learn about the world’s highest mountains, longest rivers, deserts, and the like. For my brother and I, we always found distant places the most fascinating, perhaps owing to the fact that we had never traveled outside of the tiny little village where we grew up. In the absence of television and trips to the world beyond our village, we would turn to books to figure out what was out there. We were so fascinated by distant lands we would take our dad’s Atlas to school and show it to other students. Looking to the American continent on the map, in an attempt to throw them off, I’d ask my friends to show me Fiji, a tiny Pacific island nation. It is through games like these and the curiosity of the minds of 7-year-old boys that we came to learn of such far-flung places as Vladivostok, (Russia’s easternmost city); Cherrapunji (the wettest place in the world); and certainly Everest (the world’s highest mountain). As I sat in the plane scanning the horizons for a glimpse of the snow-capped peaks of the Himalayas, a sense of nostalgia descended on me as my mind wandered to those times when we longed to break free and explore the world.

Somewhere between China and Nepal. View from my plane window- finally some snowcapped mountains in the distance.

I was mostly disappointed as all I could see out my plane window were barren mountain ranges with bare rocks and occasional rivers snaking their way down valleys to unknown destinations. The only snowcapped mountains were often too far off in the distance for me to take a clear photo or enjoy a good view. I gave up and went to sleep, reassured by the fact that my final destination would be somewhere in those mountain ranges. I woke up a few hours later and looked outside to see what seemed like houses jutting out in a dusty, mountainous desert. As our plane descended to the runway, a thriving city burst into life below us. In the distance, we could see bikes, taxis, and vehicles on busy streets lined with all manner of people. It was a warm afternoon when we got off the plane at Tribhuvan International Airport. The air was thick with the smell of spices and incense. In the distance, one could hear the sound of the city: bikes roaring, cars honking, and traders, taxi drivers, and hustlers of all kinds busy about their lives. I was eager to clear the immigration and make my way into the city.

Kathmandu was in many ways as I had imagined – very similar to Douala, Cameroon’s economic capital. Busy, throbbing with life, dirty (a common feature of sprawling metropolises in developing countries) and teeming with people: traders, merchants, bus drivers, bike riders, beggars, street vendors, business professionals, crooks, swindlers and the like. There were also many easily familiar features about the city. The people doing business by the roadside, the makeshift stores, the traders spreading their wares on mats by the street sides, the ubiquitous motorbikes, and the like. One remarkable difference was that in Kathmandu many bike riders wear safety helmets unlike in Cameroon where “okada” riders couldn’t be bothered.
We arrived Tibet Peace Inn located Thamel, a touristy neighborhood in Kathmandu that’s somewhat similar to the hutongs in China, after a 30 minute car ride. The streets in Thamel are very narrow and lined with shops, banks, restaurants, bars, and nightclubs. Many of the shops sell hiking gear for tourists who come to Nepal to climb mountains. We didn’t bring much warm clothing because we’d been told we could get them cheaply in Nepal. So after settling into the hotel, we went out shopping. Many of the shops sell products with “North Face” label on them, but as I found out during shopping, they aren’t authentic. However, they are durable and look good and who cares about brands or authenticity anyways when one is going up to the mountains? Shopping in Nepal is an experience in and of itself. Cameroon isn’t much different and, having grown up there, I had sharpened my bargaining skills and was eager to show off to Nick (a volunteer with Oda Foundation) and Soo. Much to the annoyance of the shopkeepers, and much to Nick and Soo’s delight, and much to my entertainment, I didn’t disappoint. We ended up paying 4000 rupees a piece for jackets that had initially been priced at 12000 or so.

Later that evening we went out the Boudhanath Temple in Kathmandu, where we saw monks, worshippers and other spiritual observers performing religious rituals; going around the temple and spinning wheels while chanting prayers. It was a remarkable experience. I am not much of a religious person these days, but there was a palpable spirituality in the air. The sartorial austerity of the monks added to the solemnity of the atmosphere. We didn’t talk much, perhaps out of reverence for the gods; or maybe we were just overwhelmed by the spiritual gravitas of the environment. After circling the temple about three times, we made our way for the exit, hopefully with cleansed souls and without defiling the sanctity of the place of worship. Given the ascetic and spiritual lives of some of the worshippers there, a worldly person like I did feel somewhat unworthy to partake in their religious rituals. 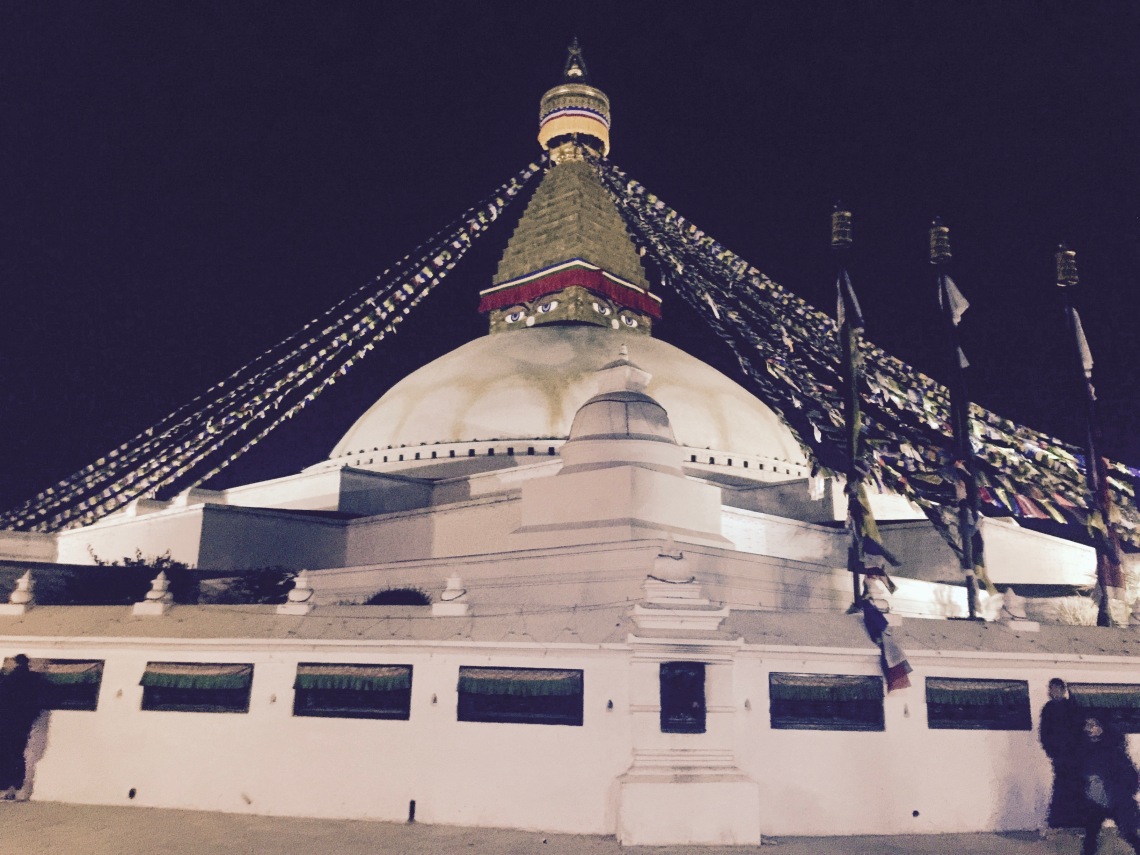 Boudhanath Temple in Kathmandu; the top part is newly rebuilt. It was destroyed during the 2015 earthquake in Nepal that reduced many parts of the city to rubble.

Later that evening, fresh from spiritual revival, we went to eat at a restaurant and thereafter Soo, John, and I met up at a bar in Thamel with a few Schwarzman Scholars who had come to Nepal to hike to Everest base camp. Whatever spirituality was left in us quickly dissipated after downing a few pints of beer. First John left; and soon after I noticed Soo was very tired too. Knowing that she’s not one to complain, I offered to walk her back to the hotel. The streets in Thamel are built like a maze, and in the weariness, the adventure of finding our way back to the hotel wasn’t tempting at that moment. So we took a taxi. After dropping Soo I went back to the bar to meet up with my two friends, Tara and Kumi. That was the only night our times in Nepal would coincide and we had to make the most of it.
All the while at the bar, Oda was at the back of my mind. I couldn’t help but imagine what this place would be like. I had tried to Google it and came up with nothing. The only image of it in my mind was a picture of the façade of the building that houses Oda Foundation’s operations. So I couldn’t even tell or describe to my friends where I was going. I just knew it was high up in the mountains of western Nepal. I was excited and ready for the adventure. But I wasn’t ready to get my mind blown away. Little did I suspect this was going to be one of the most enlightening and most important trips I’ve ever taken.

Stay tuned for the continuation of the story. Next time:  Episode 2: The Long Road to Oda

View all posts by bumablaise